L.A. Marzulli Interview - Introduction to SRA  (.mp3 file)
Introduction to Satanic Ritual Abuse (SRA)
PREPARING FOR BATTLE
by Holy Living Ministry
Thu, September 8, 2011
Today's guests will be Douglas Woodward and Douglas Riggs...Douglas Woodward has written an astonishing analysis of the end times, focusing on the Mayans, bible prophecies, and the end of the world. His book Decoding Doomsday:2012, The Apocalypse and the Perilous Days Ahead. It is a fresh update to bible prophesy that also focuses on revelations and the end of the world from many other sources. Douglas Riggs came to the Lord about at age 11, but didn't begin following the Lord until age 24. He now counsels and helps counsel folks on Satanic Ritual Abuse , and help people deal with past things like unforgiveness and renouncing generational curses.
Holy Living Ministry:
Interview with Douglas Woodward and Doug Riggs (.mp3 file)
Acceleration Radio: Doug Riggs / Satanic Ritual Abuse and more!
Posted by lamarzulli on January 27, 2010
It was about 1985 that the Lord began revealing that we had survivors of Satanic Ritual Abuse in our midst. It's been the occasion for us to "put on Christ" and to learn utter dependence upon Him in the deepest and most desperate ways. We are very aware of the conflict that is raging in the heavenlies and playing itself out here on earth - IN THE CHURCH! It has been our experience over and over that we do not wrestle with flesh and blood, but with principalities and powers in the heavenly places. This is not theory to us, but a daily reality.
We have had many battles and victories; and sadly, we have sinned against our Lord and His Body due to our pride and immaturity. We praise Him for His mercy and grace, as well as His commitment to His people's restoration and maturity in Christ. We trust Him daily to complete that which He began in His sovereign grace and mercy.
Doug Riggs
Preparing for Battle
Introduction to the Nephilim
End Times Radio / Barry Meyer
End Time Talk Radio - Podcast March 1, 2011 -
Introduction to DID: Interview with Doug Riggs (mp3)
End Time Talk Radio - Podcast May 24, 2011 - Introduction to
Nephilim Mothers / Genesis 6 Project: Interview with Doug Riggs (mp3)
End Time Talk Radio - Oct. 24, 2011 - SRA / DID / Nephilim /
Super Soldiers: Interview with Doug Riggs & Dr. Preston Bailey (mp3)
SRA / DID / Nephilim / Nephilim Mothers / Genesis Project
Interviews with Dr. Stan Monteith
Link to Radio Liberty web site
5-10-12 Dr. Stan Monteith / Doug Riggs (.mp3 file)

11/20/2012 Interview with Dan Duval mp3 - 1 hr / 40 min.
Bloodlines, Nephilim, and Principalities w/ Doug Riggs
Discovering The Truth w Dan Duval
This week will undoubtedly yield another revolutionary episode of Discovering the Truth with Dan Duval. Our guest this week is Douglas Riggs. Long before anyone was talking about the issue, the Lord led him into many years of counselling with those that had Dissociative Identity Disorder (DID) and were involved in the deepest agendas of the kingdom of darkness. His journey has been long and difficult as a pioneer in the area of DID. However, it has provided him a platform out of which to expose the works of the enemy. It has also caused him to become an authoritative voice on the issue. This week he will be joining us to share some of the truths that have been uncovered.
While many of the topics he will discuss are difficult to digest, they are nonetheless important to be aware of. We will be touching on the importance of bloodlines in the occult. We will also talk about what he has learned in reference to the Nephilim agenda as well as the difference between dealing with demons and principalities. We will also be talking about the relevance of the "ten kings". Don't miss this power packed episode of Discovering the Truth with Dan Duval.
11/21/2012 Interview with Monique (Radio Preacher Man / BlogTalkRadio)
Coming Judgement on the Church - Biblical framework for the apostasy of the church in the last days, the resultant judgement we should expect, and our preparation for it.
We are facing the end of days as written in the Bible, and it is obvious that America is under judgment. It is imperative, especially now, that we develop a close relationship with our Creator Jesus. In these end days, it is vital to hear the Word of God and then be a doer of the Word.
12/30/2012 Doug's Interview on Blog Talk Radio with John Baptist
Dissociative Identity Disorder and the New Nephilim with Doug Riggs
2/5/2013 Interview with Dan Duval mp3 - 54 min.
Modern Day Hybrids with Doug Riggs
2/26/2013 Last Days Update from Doug Riggs
Interview with "Radio Preacher Man"
(52 1/2 min. mp3)

Part 4
In Part 4, Theodicy is discussed:
The theological term for God being vindicated through His
sovereign permission of evil  is called Theodicy
CLICK HERE FOR LINK to Gilbert's website

Parts 1 & 2: Understanding Genesis 6, The Nephilim,and the Days of Noah
Part 3: The Current State of the Church, The Great Falling Away,
The Rapture & What's Ahead
Introduction by the interviewer Gilbert Myers
Part 4 - The Vindication Of God and His Allowance of Evil
Podcasts, Interviews, etc.
Welcome Visitors !!!
Dr. Stan Monteith's Interview with Doug
SRA/DID & Trauma-Based-Mind-Control mp3 [Date: 04-11-13]

Dear Friends, For those who may be interested, this is the latest interview I did with author and researcher Scott Keisler.
Blessings, Doug
On the Trail of the Nephilim by L A Marzulli
Coast to Coast AM - George Noory w.
L A Marzulli 6/11/2013 (mp3 1:54)

Globalism, Demonically Charged Ideology, Programmed Assassins, MK-Ultra mp3 [Date: 10-3-13]
Dr. Stan Monteith's Interview with Russ Dizdar
"When is the last time that you spent time wrestling with God in prayer? Do you believe He has the power to answer? Eric and Leslie Ludy of Ellerslie Ministry unpack what it means to go hard after something in prayer and faith."

Genesis 6:4 The Nephilim were on the earth in those days, and also afterward,
when the sons of God came in to the daughters of men, and they bore children to
them. Those were the mighty men who were of old, men of renown.
Numbers 13:32  “The land through which we have gone, in spying it out, is a land
that devours its inhabitants; and all the people whom we saw in it are men of great
size. There also we saw the Nephilim (the sons of Anak are part of the Nephilim);
and we became like grasshoppers in our own sight, and so we were in their sight.”
Luke 17:26 "And just as it happened in the days of Noah, so it will be also
in the days of the Son of Man..."
Correction: Greek word used to reference the comparison of Jude 6 and 2 Cor. 5:2
should be οἰκητήριον http://biblehub.com/greek/3613.htm
The Week in Conspiracy - Interview with Doug Riggs 10-4-14

Chuck Missler:
Return of the Nephilim
The Days of Noah
The Coming Cosmic Deception
In Russia in March of 2012, the Global Future: 2045 Conference or ‘GF2045′ held to focus on the Singularity – the moment when humanity will physically combine with machines to allow for humans to live outside of the physical body, with robot “avatar” bodies and overcome disease, pain and even death. While it sounds like the stuff of a science fiction movie, it is a very real movement and field of study for scientists who believe that humanity is on the cusp of its next stage of evolution. And it once again reveals an attempt to reach immortality without the God of the Bible.
The Singularity: Science's Quest For Immortality And Satan's Deception
Beginning And End 2045: A New Era for Humanity
mp3 messages from
Mark Eastman:
The History of UFO's
Alien Contact?
Chariots of the Frauds

As the Days
of Noah Were:
Return of the Aliens?
by Chuck Missler
(Link to article) 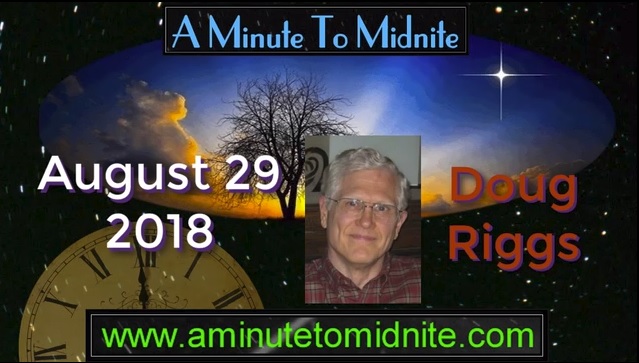 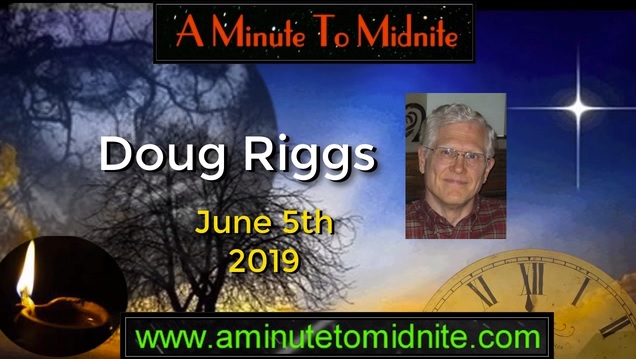 Doug Riggs  -  Satanic Ritual Abuse:
The Perpetrators, the Motivations, &
The Fight Against It
Tony asks Doug Riggs a series of important questions on Satanic Ritual Abuse and it’s use in the programming of victims
9/19/2019 - Doug Riggs Interviews "Joshua Collins" (US) & "Joe" who resides in S. Africa.  "Joshua” & “Joe” share their SRA histories of sadistic ritual abuse which includes being programmed by Dr. Josef Mengele. These Christian men reveal amazing insights of their journey out of darkness and captivity into freedom and victory in Christ! Special insights are shared by both of these men regarding helpful counseling protocols and their history of abuse in Christian churches and ministries.
1/11/2020 - Doug's Second Interview with “Joshua” & “Joe”
Dear friends,
This is the most phenomenal comprehensive cutting-edge interview I have
EVER done in my 35 years of work with hundreds of SRA/DID survivors of
trauma-based-mind-control!
This interview contains the personal testimonies of two courageous Christian
men who are generational SRA/DID and were programmed by the nefarious
Nazi doctor, Josef Mengele, known as “the angel of death.” A wide spectrum of topics are discussed which include the contemporary spiritual condition of the Body of Christ, many of whom are largely oblivious of the reality of the current hybrid breeding program, the coming disclosure event, UFO’s, the trans-humanist agenda, A.I. and much more! Every SRA survivor and everyone who is ministering to SRA survivors needs to listen to this interview more than once!
...”the time is near” Rev. 1:3
Doug Riggs

Satan Creating his Satanic Nephilim Army - YouTube
Satan is has been busy preparing his demonic Nephlimite army believing that he can defeat our Lord Jesus Christ. Satan is in a losing battle although he probably believes he will be successful. Today (August 1, 2020) we discussed this demonic army with Doug Riggs and their demonic breading program.                           Israeli News Live with Steven Ben Nun 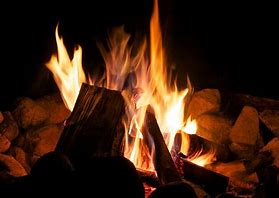 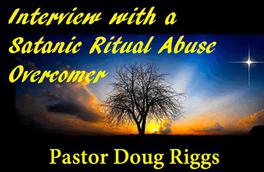