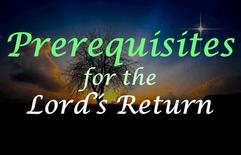 First aired on GeorgeAnn Hughes' ByteShow Podcast in 2009 (approximately), Pastor Doug Riggs challenges the common belief that the rapture of the church can happen at any time. This bible study takes us throughout the Old and New Testaments to explain the conditions necessary for the return of Jesus Christ for the church prior to Daniel's 70th Week, the Day of the Lord we know as the tribulation. Doug gives us a lesson in Koine Greek on the simple word 'until' and its usage as an indefinite temporal clause in scripture. This is the Playlist of 9 interviews given (as they become available), edited and condensed with video assist so we are able to learn with both our ear-gates and eye-gates. 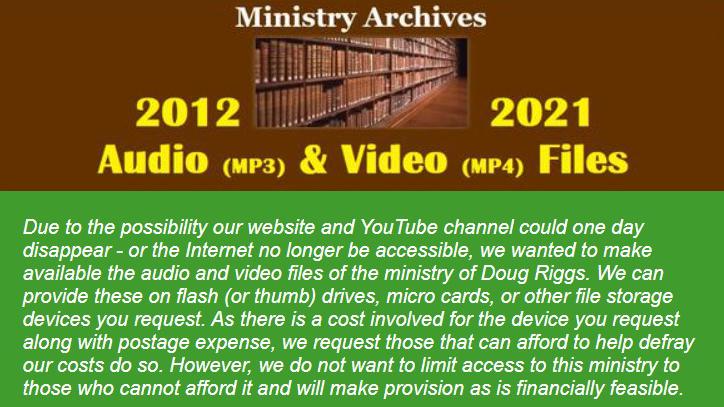 For the convenience of those who would like to contribute to the website ministry:
Notice: Book Ministry is not a tax exempt organization and therefore donations are not eligible for tax deductions.

For Such a Time As This  by T. Austin-Sparks
Assembly Message        Discussion

"Be Being Filled with the Holy Spirit"    Sunday Assembly         (re-post: 3/27/22)
​Jack Taylor: The Key to Triumphant Living (link to audio)
The Rising of Jesus Christ as the Morning Star
in the Hearts of a Prepared Remnant   Commentary
What Does it Mean to Be a Christian?
"We Wish to See Jesus!"           Sunday Assembly    -   Discussion
re-post 3/30/2022
On January 5, 2022 our pastor Doug passed peacefully
into the presence of his Lord and Savior, Jesus Christ.
We will soon be reunited!  Maranatha!!! - Come Lord Jesus!!!
God's Prerequisites for us to Walk in the Spirit
"Be Being Filled with the Holy Spirit"   Wednesday Assembly   (8/30)  Discussion
Day by Day - Daily Meditations from the ministry of T. Austin-Sparks
re-post 4/3/2022
The INIQUITY FORCE - The Strategic Nature
of Satan's Work in the Last Days
and Why Biblical Holiness Must Become
the Armor to Withstand the Enemy's Onslaught
Link to Resource--->
Sunday Assembly       Discussion